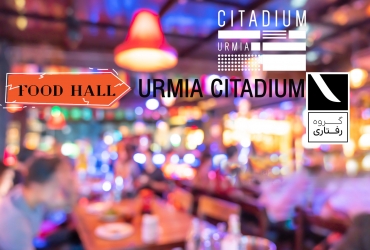 through supervising and reviewing the studies carried out by the Development and Operation Management Department in order to determine the brands which should be present in F&B (eating and drinking) unit of the entertainment and commercial complex of Citadium, Raftari brand was determined as the manager of the food-hall.

Citadium is a place for gathering the best; it has invited the owners of the best Iranian brands to be present at the Urmia Citadium Shopping Center. The One Iranian Co, Strategic Development Consultant, along with Echelle Company, as the project operation manager, through holding specialized meetings, visits and negotiations with reputable brands in the food industry of shopping centers, agreed with the Raftari Group in order to manage the food-hall of Citadeium Complex.

Today, food courts (food-halls) have become an integral part of modern shopping malls and are essentially one of the strengths points and attractions of shopping and entertainment centers. It can be said that one of the main concerns of the builders of commercial complexes is to allocate large and spacious spaces to food courts in order to attract more people and create vitality. On the other hand, the term food-hall, which is used in some countries synonymously with food court, has confused constructors and investors.

Food-hall, like food court, has a common space, and even in some middle-east countries the two concepts are used interchangeably, but the nature of these two concepts is different, and here are some of these differences:

The starting point and initial activity of the Raftari chelokebab restaurant dates back to 1910 When restaurant management in Iran had not found its current meaning, and in the city of Tehran, there were not a lot of restaurants that could literally be called and identified as restaurants. Haj Ali Akbar Raftari (Nader Raftari's grandfather) opened the first branch of Chelokebab Raftari in the Vahdat-e-Islami Square inside the Ghavamo dowlleh Bazaar, to host and offer Iranian food to its customers. Haj Ali Akbar may not have noticed the current status of Raftari in the Iranian restaurant industry, but there is a common belief that all those who have managed this brand from the beginning to the present, believed in “providing the best service to all Customers and increasing development”, this belief has covered the thinking of the Raftari family and has brought gains for them every decade.

After a while, Chelokebab Raftari restaurant moved from the Vahdat-e-Islami Square to the Vahdat-e-Islami Street and worked there for 70 years. Attention to food hygiene in Raftari restaurant was that great which for the first time in Iran, customers' visiting of the kitchen before eating were considered their inalienable right. The kitchen in the dining hall was built in such a way that customers could easily visit it.

The great quality of Raftari’s food was such famous in Tehran that led to the development of Raftari restaurant. in 1975, with the efforts of Mahmoud Raftari (Iran's wrestling champion), major repairs were made in this place and it became a 4-floor building with 1560 square meters of infrastructure Where 50 workers were employed. Meanwhile, with the death of Haj Ali Akbar Raftari, the management of this brand was transferred to his children Haj Abolghasem Raftari and Haj Mahmoud Raftari. The turning point of the Raftari restaurant occurs when Nader Raftari returns to Iran from the United Kingdom with the aim of developing and strengthening          the Raftari Chelokebab restaurant in 1985. He starts his work from the initial point as a restaurant waiter, to become proficient in the business of restaurant management. According to him, this could be one of the most important reasons for the success of anyone who wants to enter the restaurant industry. Currently, Raftari Chelokebab restaurant is a popular brand among the people of Iran. Regarding success of this brand's branches in Tehran such as Vahdat-e-eslami Branch (Shapoor), Saadatabad, Dowlat, Enghelab, Bamland and Darvazeh Tehran , the Raftari brand group is trying to develop its brand in other cities of Iran by maintaining high food quality, and even outside of Iran in its future plans. Given the long history and brilliant experience in the market, this group has been present in shopping malls as an operator of F&B industry in order to develop the Raftari brand. The first appearance of a Raftari group in shopping malls as an operator of a food court complex was on the Bam Land shopping center of Tehran.

The One Iranian company through opportunities and value engineering studies of this project is responsible as the strategic consultant for project development. According to the strategies proposed by this company, market studies in order to find about preferences and the types of behavior in Urmia, comprehensive and accurate studies of successful shopping centers in the world and equipping the Citadium complex with international standards, and the simultaneous consultation with the operating management, the F&B collection as food-hall concept will be operational under the management of the Raftari brand in phase A.