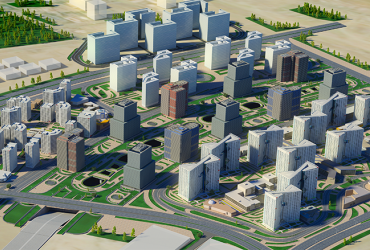 Chitgar Residential Town, previously called Imam Reza Town, is located in front of the enormous project of Hezar o Yek Shab in 22nd district of Tehran. Such modern town with educational, therapeutic, sport, cultural and religious uses is placed on a land with the area of 180 hectares and after the beginning of The One Iranian Company’s activity, its name has changed. The major goal of building this project is the realization of subsistence plan for housing esteemed employees and retirees of the army and construction of 20 thousand residential units.

After the successful performance of The One Company in Erfan Project in the district of 22, different contractors and owners in the district including the respected contractor of Chitgar Residential Town contacted The One Iranian Company and in 2014, exactly when the issue of financing for the project was facing lots of problems, The One’s cooperation in sales and marketing for Chitgar Residential Town commenced.

Project’s problems at the beginning of cooperation:

Some of them were as follows:

In order to progress and manage the project, The One Iranian Company used its subset brand, Avant-grade Iranian Company that had been established for doing economic projects, recruited trained personnel of The One Company and Erfan Project in a completely separate chart and also by the made policies in The One’s thinking room. Due to the nature of project, for the first time,

"we reached the program from the goal."

By this way, we started all strategies and planning to reach our goal i.e. turning the project to the busiest sale project in Iran and also forming a queue of people to buy.

By adopting orderly precise strategies for sales and marketing, establishing sales office in the project’s area, making a queue of applicants with the contractor’s coordination and without informing others, we succeeded in making the price of stocks real and reviving the buying and selling of stocks.

Some of the important and effective actions for branding that led to the success of such project are as follows:

We managed to sell 1000 residential units in this project and thanks to the financial assistance contributed at that time, more than 1200 residential units were transferred to the stockholders. The One Iranian Company was ready to transfer 9 to 10 thousands other residential units during the 2-3 following years while in spite of our company’s recommends, with the contractor’s complete consent, the term of agreement ended.

This project is one of the most memorable projects for The One Iranian Company and Avant-garde Iranian that during the project they could break all the previous records of Avant-garde including the number of employed workforce in the project, the number of selling offices, forming queues of people for buying and etc. Cooperation with Darvag Company in advertising is another good experience for our company in this project.